How to Use Icebreakers at a Networking Event, Bar, or Party 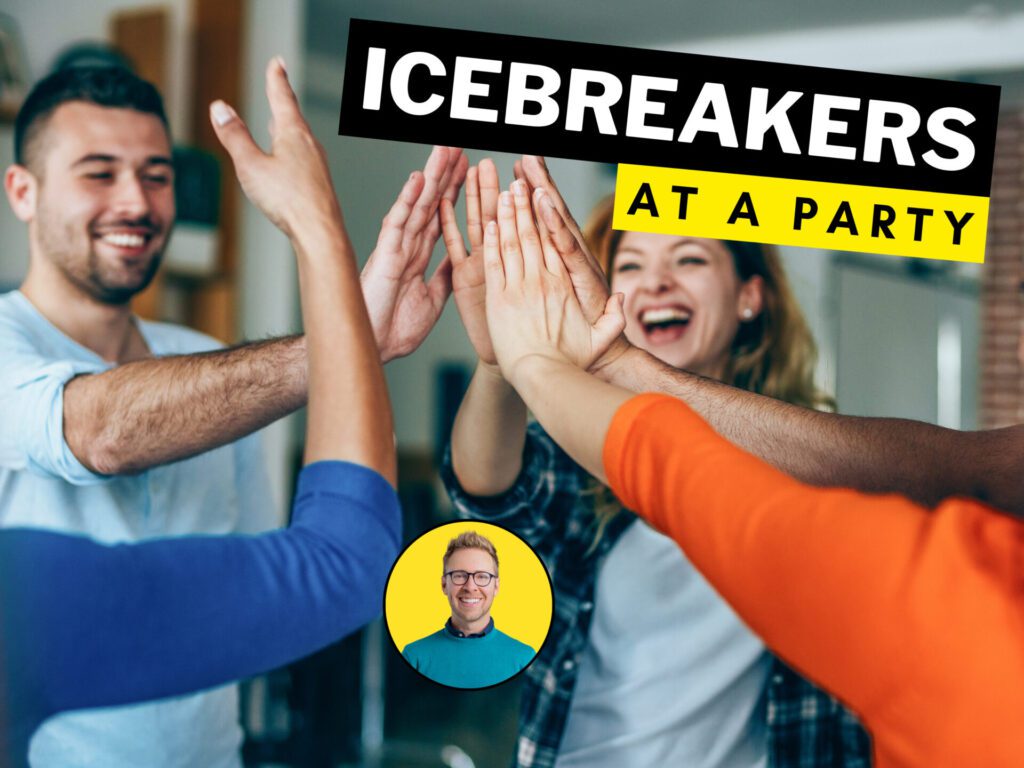 I love using icebreakers at my parties to create new connections.

But what about when you’re not hosting the party?

Can you still use icebreakers to introduce friends and meet new people as a guest?

In this article, I’ll show how you can use icebreakers at networking events, bars, and even parties where you’re just an attendee.

Some parties you attend will be full of interesting people, but the format of the party makes it difficult to have conversations with new people.

Creating structure so people can meet each other helps. You can do this by organizing a round of icebreakers.

Here are the best opportunities for a round of icebreakers:

When you feel the time is right for you to lead a round of icebreakers, you should:

After you do an icebreaker, everyone will have new things to talk about. You’ll create more connections.

For more information about icebreakers, including exactly how to do them, see my main article. How to Do Icebreakers: The Ultimate Guide

Mary Beth Yale is a literary consultant who splits her time between Mexico and the United States.

I’m going to tell you how she uses icebreakers to meet new people, but first I want you to see a picture of her:

Mary Beth had experience hosting a party using my party formula, including running a few icebreakers. This made her ready to take on a new challenge: using icebreakers outside of her party.

Icebreakers at a Bar

Mary Beth was having drinks on a Friday night with one friend and her two coworkers who she did not know.

She recalled that they were both a bit quiet and tired after a long week of work.

They were talking about a party she was hosting soon. She then invited the coworkers to one of her parties!

Then they started talking about the concept of icebreakers and how they work. Mary Beth told them about the breakfast icebreaker and why it works and how to use it. They all shared their favorite weekend breakfast foods and all had great new ideas for their next hangover!

Later in the night, Mary Beth did the same icebreaker in a larger group. That helped her to meet more people at the bar.

Using Icebreakers at Another Party

The next time Mary Beth did icebreakers was at a fairly quiet pregame.

She was not especially close with most of the six people who were there. However, two of them missed her party because they were traveling.

They asked how it went and Mary Beth told them about the icebreakers they had done: say your name, what you do for work, and one of your favorite foods to eat for breakfast.

Everybody was happy to try it out! But instead of breakfast, they each shared one of their favorite restaurants.

Then, they got on a roll and somebody recommended their favorite apps on their phone.

It was a cool way to meet and connect with people Mary Beth said she probably wouldn’t have otherwise.

Icebreakers have helped Mary Beth get past the surface level of introductory conversations, and hosting parties has given her the confidence to introduce them to groups of people she barely knows.

If you recommend an icebreaker with a lukewarm attitude, nobody will want to do it. They are much more likely to join If you enthusiastically explain why they should do icebreakers.

But icebreakers are a fun thing to do. People like fun things, especially if you are excited about it.

BONUS: Mary Beth was featured as a Party Profile in my book The 2-Hour Cocktail Party. Here’s what her profile looks like inside my book.

Adam lives in Austin, Texas. He’s hosted several parties using The 2-Hour Cocktail Party formula. He has become an icebreaker monster! He leads icebreakers at many bars, restaurants, and other parties that he attends.

Nick reached out to Adam to ask him about his experience doing this. Here’s what Adam wrote back and shared to us about that.

Icebreakers at a Restaurant

“I was having dinner with four friends at Grizzelda’s on Wednesday, which is a Mexican restaurant in Austin. There were two women sitting at the table next to us about eight feet away. They looked to be about our same age. The women were demonstrating golf grips to each other, so I asked a question about it. They seemed friendly, and I found one of the women intriguing, so I said:

“This is a little random, but I read a book about this recently, would you like to do a round of icebreakers with us?”

They agreed and we all just stayed where we were sitting. I went first to model it and we did, our name, our job, where we are from originally, and our first car (mine was a white 95 Nissan Altima).

It turned out these two women were meeting from Bumble BFF for the first time and both play golf so I got their info and invited them to an upcoming Bumble event at TopGolf. I ultimately couldn’t make it to that event, but hope to keep in touch with them in the future. I never would have talked to them without icebreakers!

Icebreakers at a Bumble BFF Event

I was at a Bumble IRL event on Thursday at Irene’s, a bar in Austin. I did multiple rounds of icebreakers with groups I met there.

The first round was when there were only three of us. It was a good time to practice the format. I encouraged them to think about icebreaker questions that they might want to know about other people. Afterward, I did several more rounds with more people because 30+ others showed up.

Something I’m finding helpful: in Austin, where people are usually from elsewhere, it would be great to generally add where they are from. At this event, I tried “what was your first music album” (I think for me it was an MC Hammer tape, 2 Legit 2 Quit) and that was pretty fun.

Icebreakers at a Networking Event

After the Bumble event, I went to my first InterNations event in Muller and took some other advice from Nick’s book. I spontaneously invited a couple people from the Bumble event with me (one woman I knew from before and her friend). We drove over there together.

At the InterNations event, I was in a group of about five people and suggested icebreakers. As we started, about four more people spontaneously joined the circle.

With this group, I did name, job, hometown, and first car. A guy from Spain afterwards seemed somewhat impressed that I took charge of the group, and told me, “I think you’ve done this before”.

Icebreakers at Another Bumble Event

I was at another Bumble IRL event packing lunches for homeless people on Saturday at CRAFT in East Austin. After we finished the packing, I found myself talking to about six people who had mostly just met. I said something like:

“I’m excited to meet you all, let’s do a round of icebreakers!”.

An employee of the place, probably in her 20’s, was right there and tried to step back as if she wasn’t invited, but I encouraged her to join and she did.

I mentioned Nick’s book and my party to the employee. She said she had been noticing during the event that I had been facilitating introductions and complimented me on it. I told her that she should meet Nick, the book author who takes it several levels higher than me. She replied with a smile, and in a slightly wide-eyed but joking tone, “wow that’s terrifying”. 😂

I took down her info and invited her to my party next week too.

Organizing a round of icebreakers will help you and the group mingle, regardless if it’s not your party. You can use icebreakers at networking events, bars, and other parties to help you and others create new conversations.

Remember to do these four things to ensure a great outcome:

My name is Nick Gray. I wrote a book called The 2-Hour Cocktail Party that teaches you how to have a successful party for any occasion. It’s a great resource that helps adults make friends. I’m really proud of it.

When will you host your next event? I’d love to help you by holding you accountable and giving you some more advice. Email me with your event date or any party questions!