Lightning Talks: What and How to Do Them 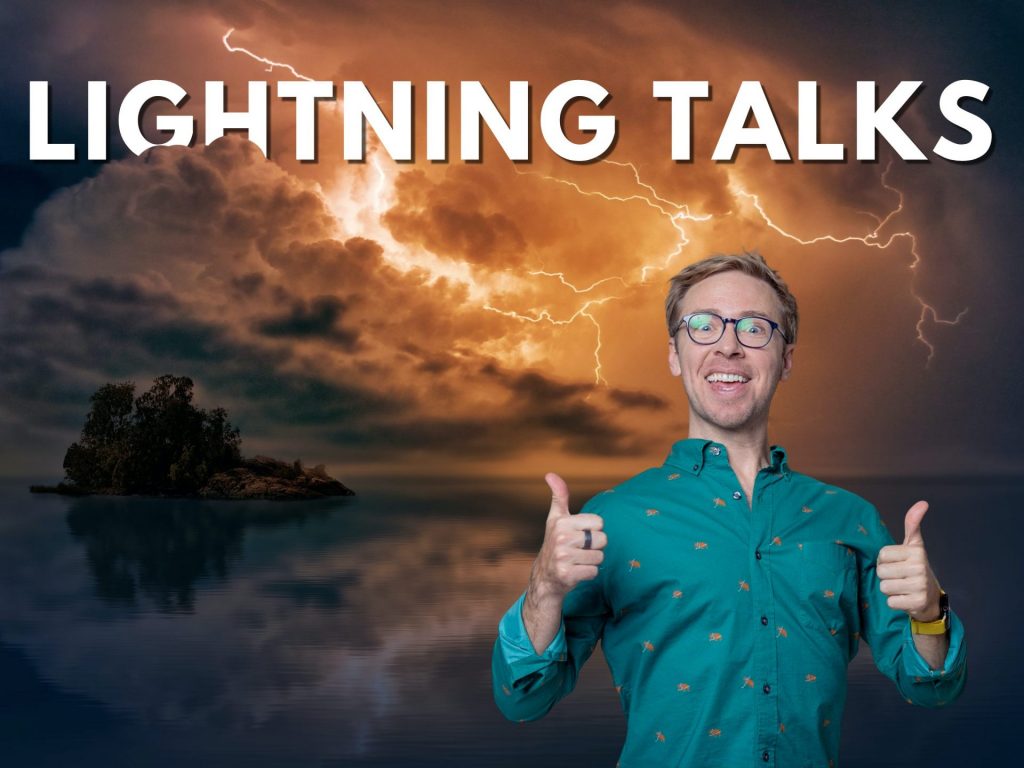 Lightning Talks are meant for your party attendees to share interesting information with each other where several speakers will share a topic that they are passionate about.

At the end of the Lightning Talks, new conversations will be created because people will want to talk to the speakers about the things that they have spoken about.

What is a Lightning Talk?

Lightning Talks are a 5-10 minute module that advanced hosts can add to their party agenda.

These talks are composed of 3-5 individual lightning talks, each being 45-75 seconds long given impromptu by a party attendee.

The best Lightning Talks are briefly rehearsed. Speakers will sometimes make notes that they will read off their phone.

Why You Should Use Lightning Talks

You should use Lightning Talks because they will help create new conversations in your party.

People will think of your party as a smart, fun, and cool place to learn about exciting new topics.

When you use Lightning Talks, your party will be more interesting and people will start to think of you as a smart individual who hosts exciting parties.

Lightning Talks help you encourage new conversations and allow your guests to speak about something they are truly excited about.

When to Use Lightning Talks

You can use Lightning Talks about one hour after your party has started.

Use them to add an extra burst of energy, excitement and information to your party.

As a reminder: I usually like to use Lightning Talks about 45-60 minutes after my party has started.

I always do them after I have led at least one round of icebreakers.

The reason for this is so that the room has been opened up, people have been introduced and the host can get an idea for who is a good speaker who could possibly give a lightning talk.

At the end of your first icebreaker you should have an idea of who you want to invite to do a Lightning Talk.

Think about who was a good speaker in the icebreakers, who felt comfortable in the crowd, and who might know about something very interesting that they want to speak about.

Once you have ended the icebreaker, go up to some of those people and ask if they would like to do a Lightning Talk.

Tell them that it is only 30-45 seconds and that they just have to share some facts or details about things that they are passionate about. You can ask them to speak about a specific topic that you might have in mind.

For example, my friend Neville Medhora is very good at writing and copywriting. If I was hosting a party and Neville was there, then I would want him to make a Lightning Talk about what he has learned or what he teaches people about copywriting.

Now go around the room and ask people if they want to make a Lightning Talk. You want to collect about six different people who say yes. Then you can either do all of those six people at once, or you can split them into two separate groups of three.

These are some suggestions for whoever might be interested in trying lightning talks at their next party.

Who to Select for Lightning Talks

Select some of your most interesting guests. You should ask the people at your party who have done fascinating things or are very smart about interesting topics.

You can even just ask someone who is a good speaker or who is a lot of fun.

For a new host, you don’t have to stress so much about who to invite to do a Lightning Talk. The most important thing is you invite someone who wants to do it! More about that later.

How to Invite Someone to Speak

Approach your potential speakers with ease.

Never pressure them because that would only make them feel anxious and hesitant.

Hype them up and converse with them about the topics they are interested in. They might even be more willing to share it with a larger audience once the topic has been opened.

For each round of Lightning Talks, you should have three to five speakers.

Never have more than six speakers. You do not want it to get boring.

How to Ask for Volunteers

When I am asking people to do the Lightning Talk, there are 2 things that I focus on.

I focus on passion and short time frames. It is always important to tell people that a Lightning Talk is very short. I do not want them to think they have to do a TEDx talk with slides.

You should ask someone which topics they want to speak about and then try to help them select a topic that is interesting and that you think would add value to the room.

Sample Speech for a Lightning Talk

This is what a Lightning Talk sounds like. I will give an example that someone has given from one of my parties.

My friend Madi had recently read an interesting article about spiders. She wanted to give a summary of the article and so I let her do this as a Lightning Talk.

Here is what she said:

Q: Can the host give a Lightning Talk?

A: Yes, you as the host can certainly give a Lightning Talk.

Q: What happens if somebody runs late and goes over the time?

A: At about the 1min mark I start to look toward my watch and by the 1min30sec mark I blow my harmonica softly at first and then louder. It is a good idea to keep the Lightning Talks moving fast so that it does not give the opportunity for the speaker to make a long speech and suck all the energy out of the room.

Q: What are some more sample topics for Lightning Talks?

A: Someone could talk about any of the following:

Having a short lightning talk for your parties can help start new conversations and connections between your guests.

They will feel valued, too, as they were able to share something to everybody about something they are enthusiastic about.