Featured on the Reason Podcast: The 2-Hour Cocktail Party 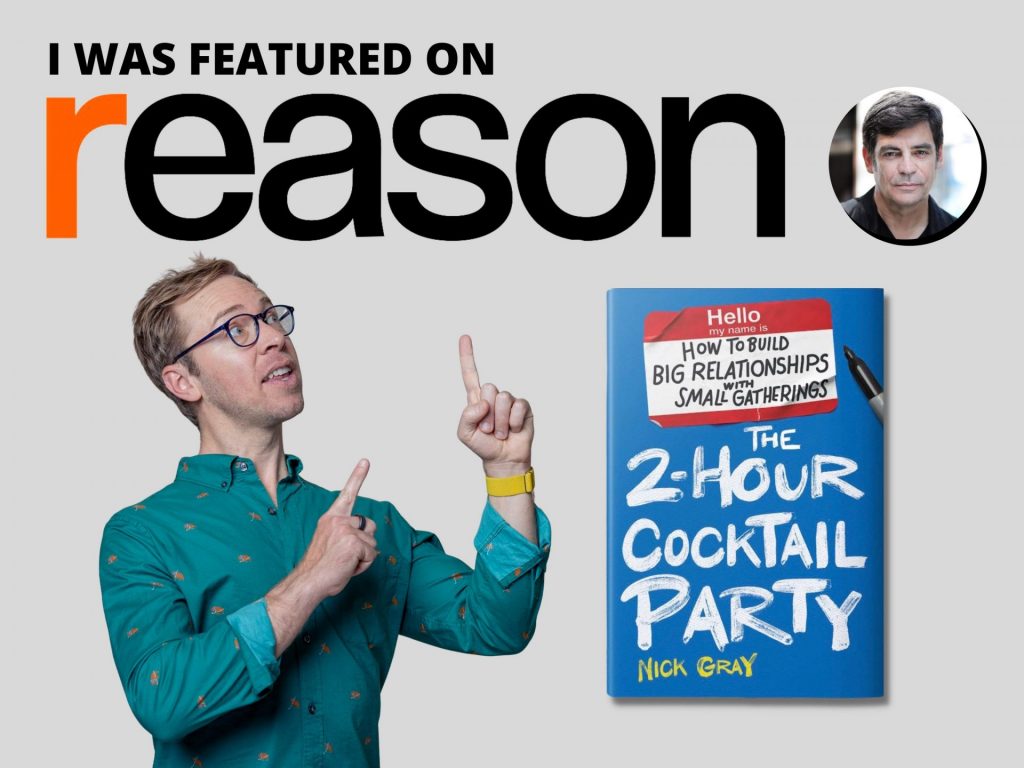 My book, The 2-Hour Cocktail Party, was given a great review on the 15 August 2022 episode of The Reason Roundtable, a podcast by Reason Magazine.

Host and Editor at Large Nick Gillespie read the book and attended one of my parties. Here’s what he said on the show about it.

This episode of the Reason podcast briefly featured my book, The 2-Hour Cocktail Party!

Matt Welch: What we have all been consuming in the cultural sphere. Nick, why don’t you lead us off?

Nick Gillespie: Now I read about an experience, a very good book by a guy named Nick Gray. It’s called The 2-Hour Cocktail Party: How to Build Big Relationships with Small Gatherings. And he actually hosted an event in New York last week.

Nick Gillespie: It’s a great kind of way, you know, the starting point of this is that once you hit your thirties and beyond, it’s really hard to actually make new friends or meet new people that’s out of very specific work situations. And this is a great book that kind of, I think in an earlier  America, we would’ve learned how to do this, or we would’ve been taught how to do this, or we would have experienced this type of thing from our parents or from older people that don’t do it anymore. And The 2-Hour Cocktail Party, I put together a great party of about 20 or 25 people who were interesting with the exception of me obviously, and really great to know, you know, I just like, am dazzled by it. And this book, The 2-Hour Cocktail Party lays out how to do that and just makes it easier and exciting to have small parties and gatherings and connect with the people around you in a new and fascinating way.

Peter Suderman: So does he write about any specific cocktails? Any advice?

Nick Gillespie: No, he doesn’t Peter. And as a matter of fact, I want to point out because this whole thing is about the intimidating stuff. So there’s no f*****g b******t about how you have to spend eight months curing your tomato strips and then squeezing them into bitters or anything. It’s like buying cheap wine and beer and Seltzer water. The food doesn’t matter. You’re not preparing dinner. You’re not even necessarily having a good nache. It’s mostly people who are dying to get together and talk and meet in a not a super intimate set of, but not a big kind of industrial rave either. So The 2-Hour Cocktail Party, very good by Nick Gray.