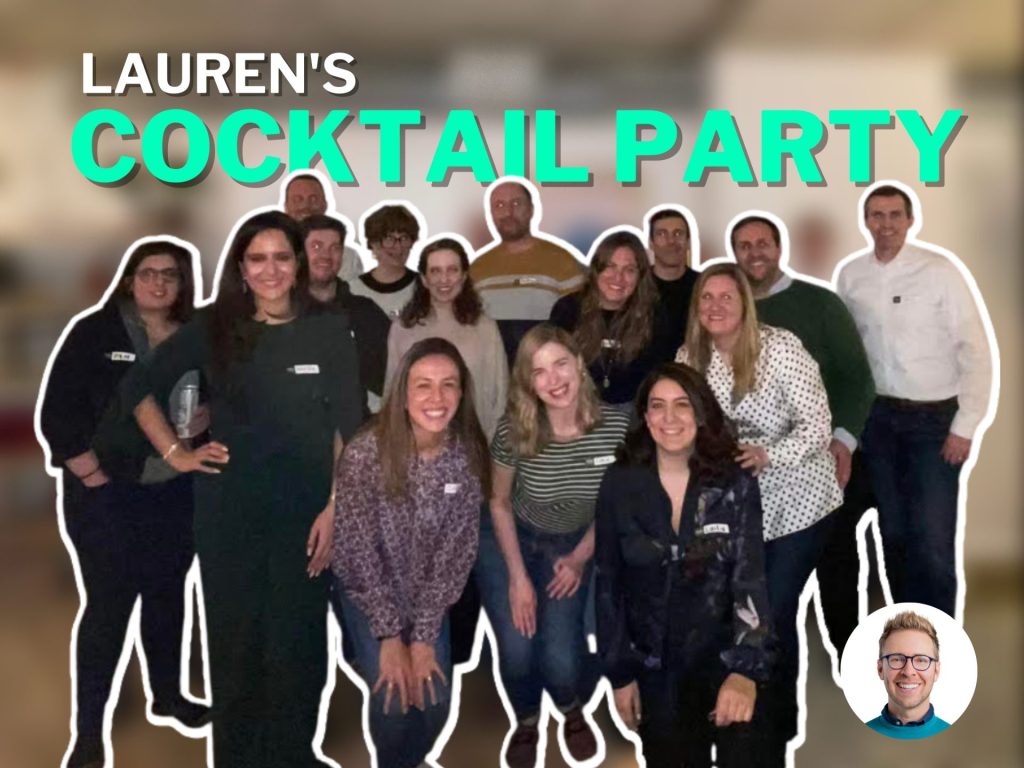 Lauren is from Washington, DC. She read my book The 2-Hour Cocktail Party and then used my formula to host a cocktail party at her apartment.

Before reading my book, Lauren had never really hosted an event at her home.

After reading my book, she had a successful party! And then she hosted more parties, too.

This is what she told me:

“It was such a great experience, and as an avid how-to/self help reader it’s incredibly rare to come across a book that works through your anxieties, makes a case and is actionable. Overall, the evening was a big success. At some point or another each attendee pulled me aside to say how much they were enjoying themselves. I even had two of the most introverted folks there ask me if I could invite them to the next one because it was unlike anything they’ve gone to.”

Keep reading to see her notes, how she prepared, her party signs, RSVP page, and some party photos below.

Lauren decided to have her first party at home on February 16th, 2022.

She picked a Wednesday night, which is great! The best nights to host your party are usually Monday, Tuesday, and Wednesday nights because they are not socially competitive.

She prepared for her first party 3 weeks ahead to use the full party runway. Taking the full three weeks gave her plenty of time to invite people, make her RSVP page, build up speed, and take off to have a successful party.

Lauren had concerns on hosting at home and the risks associated with COVID and gathering indoors.

So she made a protocol on having her guests take tests within 48 hours of the event. This was for everyone’s safety. She thought, “Better to be safe than sorry, right?”.

Lauren bought the basic alcohol from my party supplies list. Then she decided to have all of the seltzers and other snacks delivered.

The night before, she laid out all the serving dishes. Then she put post-it notes with which snacks would go where, so she didn’t forget anything. This helped her to feel confident that she had everything ready before her party.

Lauren prepared for her icebreakers, too! This is a must for first time hosts. She re-read the flow and timing as outlined in my book. Then she set some alarms on her phone, with prompts, as easy reminders.

To see exactly how to facilitate your icebreakers, read this comprehensive guide.

Here is the list of signs she made and shared with me.

Lauren used cool GIFs in her Mixily invitation. It looks super fun! She also mentioned the COVID safety protocol below to keep her guests informed.

Take a look at the guest bios that Lauren sent. She followed the tips I mentioned on how to write your guest bios here.

I’ve pasted one of Lauren’s party reminder messages that she sent to her guests below. Doing this shows that she is a host who cares! And she’s keeping her party top of mind.

Lauren shared what she observed during her party. She gave me some notes about her harmonica, icebreakers, drinks, and things she wants to do differently next time.

Thorns: What can be improved

After the first few guests got here and we were in the swing of things, the folks I’d assigned jobs to left their posts so I ended up buzzing people in, showing them where to put things away, and doing the name tags. While it was doable, I wasn’t as present as I would have liked to be during the first half of the party. Plus, I forgot to grab a couple of action shots (and my gorgeous spread) which was a bummer.

It was clear, hilarious, and large, but I think folks get tunnel vision when they’re excited and want to join in (it’s been a long pandemic).

One week after Lauren’s first party, she messaged me saying:

“First and foremost, I want to say a huge huge THANK YOU. It was such a great experience. Throughout the process I was buzzing about this to a couple of folks and you have a lot of fans! I’m looking forward to the book coming out so I can send them copies!

Seeing that my formula worked for Lauren makes me happy. It’s fulfilling that I made a big impact on her and her successful party.

Check out my book The 2-Hour Cocktail Party to learn more about my step-by-step guide to building big relationships through small gatherings.