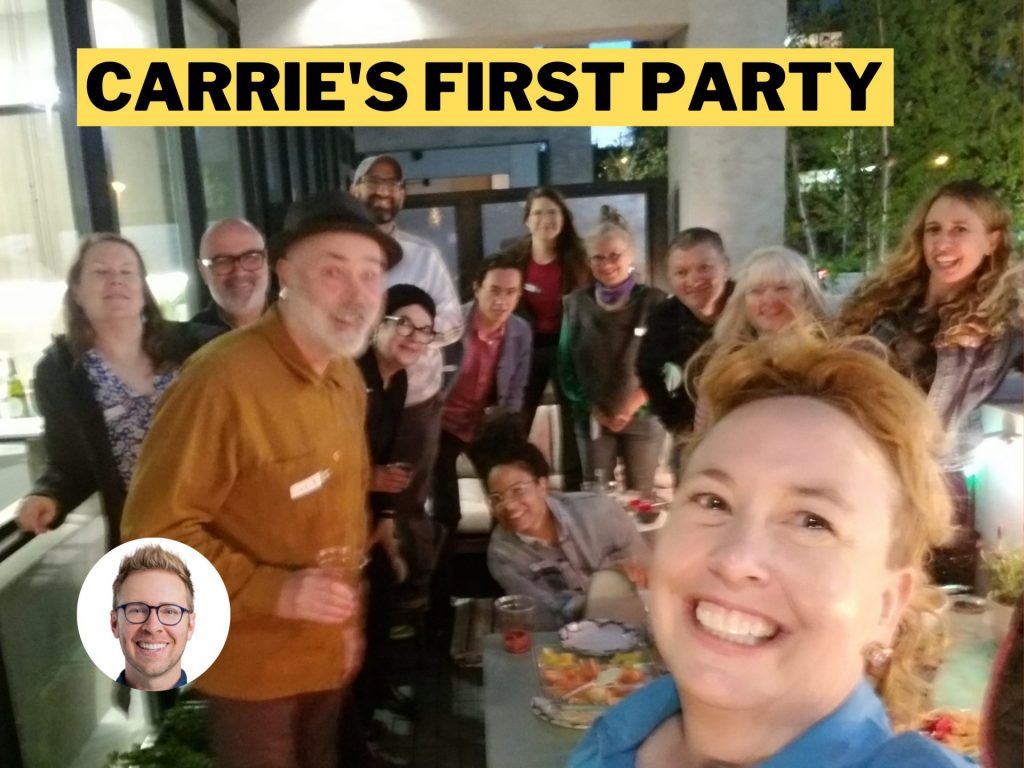 She read my book about how to throw a party as an early reader.

Now that she hosted her first party, how did it go?

Here are her answers and results.

Carrie wrote me a long testimonial, which I’ll have to ask her to share on Amazon. I thought this part was super interesting:

“From the moment I started reading your book, I was EXCITED by the prospect of hosting a party and bringing different people in my life together in a timed and slightly facilitated way. The writing in The 2-Hour Cocktail Party made me feel excited. All of the “this is going to feel awkward, but you are not alone” notes were helpful and encouraging.”

“The way you wrote about shared experiences made me feel connected to the possibility that I, too, could pull this party off! I LOVED the appendix at the end of the book as a quick study/ reference guide.”

“There was a point during the advanced icebreaker that felt tender. I started it off by asking people what their favorite piece of media they have consumed recently was. That could be a podcast, a Netflix show, a great book, an article, etc. I went first, like your book suggests, and I said that I was setting the bar low, and that I had started watching the new Grace and Frankie season finale.”

“Everyone went around the circle, and you could really sense that there was some deep listening going on. There seemed to be just the right amount of time provided for what they wanted to share, and often, what felt so tender and vital and urgent to them in their lives.”

Who attended the party?

Carrie had an excellent diversity of age groups at her party.

There were 15 guests, including Carrie, and the ages ranged from people in their early-30s to those in their late 60s.

“There didn’t seem to be a division of ages at the party,” Carrie told me. “I think it speaks a lot to the fact that everyone I invited was interesting!”

Here’s how Carrie set up her snacks and drinks at her apartment party.

I’m going to paste her comments below, speaking from her perspective.

Just go for it! Host the party!!

No one cares what your house looks like. No one cares if your place is small or if you live in an out-of-reach neighborhood.

People feel special when you invite them into your home, and people like structure. This 2-hour gathering is a consolidation of all the things that feed us socially.

End the Party On Time

At first, I thought the two hours would feel long or like work. But it flew by, so I can see how people might be tempted to let the party extend.

I believe that a big part of the night’s success was kicking everyone out at this high point. I think I let everyone stay an extra 10 minutes, but then they all walked down the hall and exited the building together.

I was cleaned up and in bed by 11, feeling like I had accomplished something great!

Icebreakers at the Office

Carrie is a studio coordinator who works with various teams and is also front-facing with clients.

Knowing how to lead a good icebreaker now and building her confidence from the parties reinforces to her that she does know how to command a room. She knows she is able to lead it in a meaningful way. That has been helpful already.

She has even started to use the party harmonica to get everyone’s attention at the office instead of saying “Hello, everyone, excuse me…” And it works wonders! Carrie carries it around in her purse because it has become a powerful new social tool.

For her next party, Carrie has reduced her Core Group and expanded her Great Guests. This is going to feel challenging to her because she doesn’t know these people well, or in some cases, at all.

She’s also going to work on making a 24-hour only connection between people after the party ends. (See how to end your party here.)

After her party, Carrie sent me this message on email:

“Thanks again for sharing your book with me, Nick! It’s a real game-changer. Even after just one party, my connection with the attendees is more substantial. My network has expanded. People want to come to my next party.”

This makes me so happy! And stay tuned for a report from her next party.

Do you want to try this and get some of the same results as Carrie? Read my book The 2-Hour Cocktail Party to see the very best step-by-step guide to hosting a powerful party.