How to End Your Party 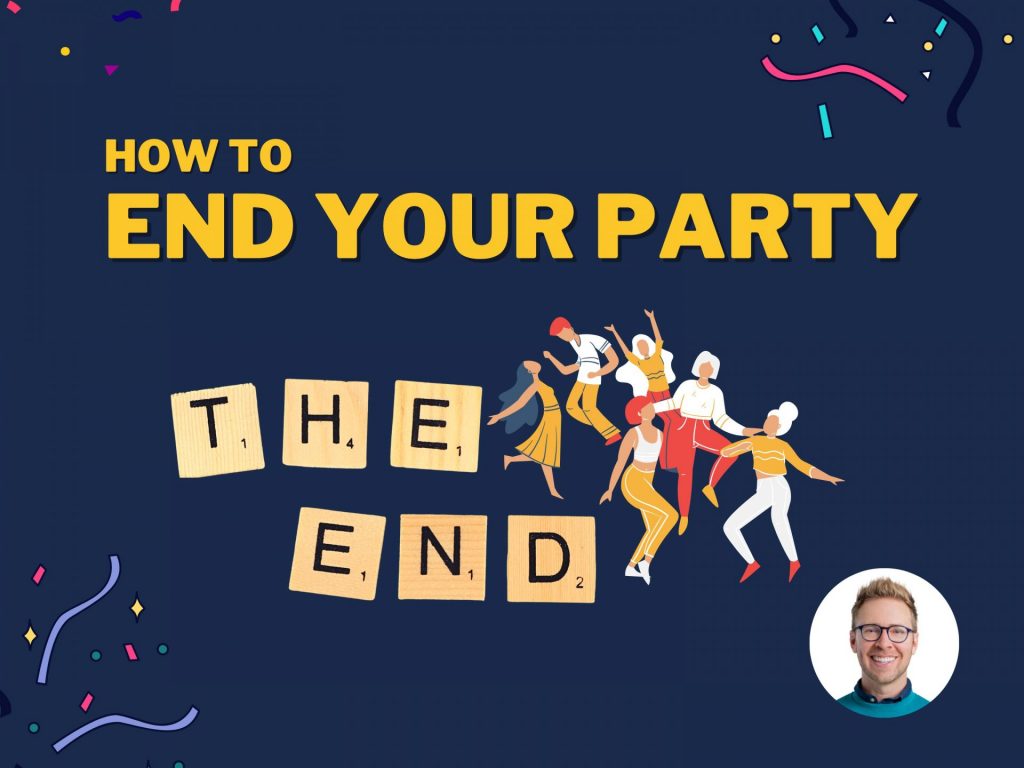 Have you ever been one of the last to leave a dying party?

You can feel the excitement drain out of the room.

I’ll show you exactly how to end your party, successfully, and how to handle people who don’t want to leave.

How to bring your party to a close

Party Pro Tip: If your party is still going strong when it is time to end, give your guests the name and address of a nearby restaurant or bar. Suggest they go there to continue their conversations.

Ending on a High Note

Ending a party is like letting air out of a balloon. You can do it slowly, so the balloon gradually loses energy and becomes floppy.

Or you can do it quickly, so the balloon makes a lot of noise, whizzes around, or even pops.

Trust me—you want to do it quickly.

At the end of your party, guests will still be talking and making connections.

It is a refreshing and effective tactic

It won’t feel natural to ask guests to leave or to end your party on time.

To some, it might be the scariest part of hosting.

But don’t worry. After hosting and ending hundreds of parties, I’ve never lost a friendship or ruined a connection by ending on time.

In fact, this tactic of ending a party is so effective that I’ve occasionally received Thank You notes from new guests.

They tell me how refreshing it was to attend a party with structure that ended smoothly.

Party Pro Tip: Resist the urge to let your first party run late. This is a common new-host tendency and easy mistake to make.

Priya Parker on Why to End Your Party

Priya Parker describes the importance of a definite and well-done party ending in her incredible book The Art of Gathering.

“In so many gatherings, somewhere during the inevitable wind-down, there comes a moment when the host or the guests or some combination make a faint, usually futile bid to prolong it. We often take these bids to be charming, and sometimes indeed they are. But they are also symptoms of gatherings that lack a clear closing.”

“Accepting the impermanence of a gathering is part of the art. When we vaguely try to extend our gatherings, we are not only living in denial, we are also depriving our gathering of the kind of closing that gives it the chance of enduring in people’s hearts.”

It may seem counterintuitive to kick everyone out when they are still having fun.

But when you do, your guests will respect your hosting skills. You conclude your event with plenty of time to tidy, recover, and recharge.

And your guests will leave wanting more and looking forward to your next party.

How I end my parties

Ten minutes before your party is scheduled to end, give your guests notice that you plan to end the party soon.

Make a last call for alcohol. I turn down the music, sound my party harmonica, and then say this:

“What a great group tonight. I am so happy with how things turned out. It brings me great joy to see so many of my friends talking together. But the time now is 8:50. I said that this party would go until 9:00. I’m going to respect your time because I know it’s a school night, and I want you to come back when I host another party. We’re going to finish up soon. There are about ten minutes left if you want to grab one more drink and say your goodbyes. Thank you all for coming.”

Then I keep the music turned down and begin tidying my apartment as a cue that it’s time to start wrapping up conversations.

How another host ends his party

Regan Starr, the guy that I mention in my party handbook who asks people to fix themselves a drink after icebreakers to keep the energy moving, follows a similar tactic when it’s time to get people to leave:

“After you thanked everyone and indicated it’s time to leave soon, stay in motion. Do not stand in one spot. If you have extra snacks, give them away. This is a generous way to reinforce it’s time to go. Here’s how it worked at my most recent party after the last icebreaker had finished: People picked up conversations or started talking to someone new. I, too, joined a group to talk. After a few minutes, I felt no one knew how to break the inertia of the party. I worried the evening would end with an awkward silence and someone finally saying, ‘Uh, I think we’re supposed to get going.’ Instead, I made the announcement. Then I started to tidy up and I took the dishes to the kitchen. I offered an unopened bag of chips and guacamole for someone to take home. People moved towards the kitchen. The conversations wrapped up, and the evening concluded naturally.”

The Last Moments Are the Most Memorable

I like to end my parties on a high note.

Sometimes I ask all my guests to circle up, put their hands in the middle, and do a cheer as though we’re part of a sports team.

I used to do a lot of work with museums, so I get people to cheer the word “museum” at the end of the night.

Everyone puts their hands in the middle of a circle, and we do a three, two, one countdown then cheer: Mmmmmuseum!

(I’ve tried to tell my accountant this makes my parties a business expense, but he’s skeptical.)

See me do an actual party cheer at one of my parties in this YouTube video:

Cheering at the end raises the energy

Doing a cheer at the end of your party sounds silly, but it raises the energy in the room significantly and brings everyone together one last time.

My guests love it.

Consider doing something like a group cheer to end your party with a word that means something special to you. Like computers. Or avocados. Or even parties.

If behaving like you’re a summer camp counselor isn’t your thing, then do what feels natural. It’s fine to just turn off the music, end the party, and kick everyone out on schedule.

Ending your party at the right time can be a high note in itself.

You’ll need to be a bit of a sheriff to end your party. Interrupt ongoing conversations and nicely ask your remaining guests to leave.

People will want to talk and catch up with you before they exit. That’s great! It means they like and appreciate you.

But now is not your time to chat. Be polite and appreciative, thank them for coming, and say something like this:

“It was so great to see you. I need to wrap this party up now so I can tidy up and get my beauty rest. I’d love to catch up later. Can I message you tomorrow so we can keep talking then?”

This lets your guest know you appreciate their presence with- out being rude.

If you have to, play the song “Closing Time” and people will finally get the hint to go.

Party Pro Tip: Set an alarm or reminder for twenty minutes after the scheduled end of the party. Use this as an excuse to ask people to leave if you get trapped in conversation.

It might seem scary to abruptly end a party while guests are still having fun.

But trust me – ending a party on a high note will make them want more!

Here are some reminders on smoothly ending parties: