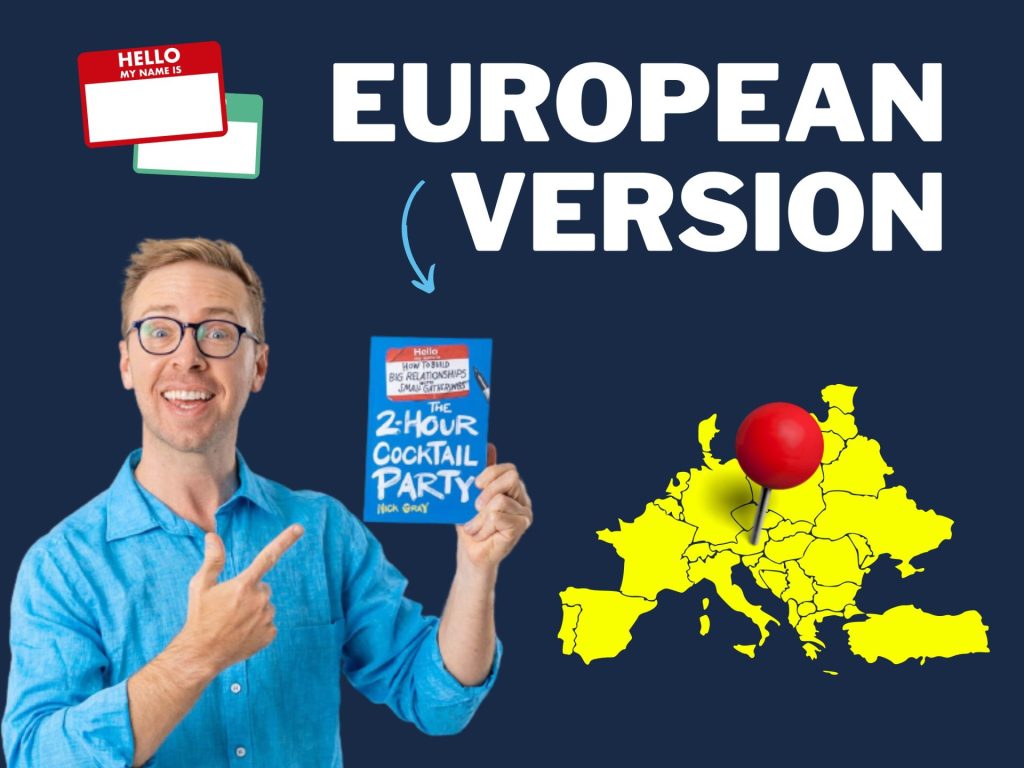 Does the book The 2-Hour Cocktail Party only work for Americans?

Would Europeans be willing to wear name tags, do icebreakers, and leave the party after two hours?

In this case study, we will find out!

Andrea lives in Turin, Italy. He read my book and hosted a party with his wife for 12 of their friends. His goal is to meet some new people, connect with those friends he does not see as often, and generally build a community for his family in Turin.

A party without name tags is like a museum without labels for the paintings. Read this article to learn how name tags are a must at your cocktail parties.

So, how would Europeans react to this mandatory party element?

Well, happily, Andrea reported that there was no resistance to his friends in Italy wearing the name tag!

“Because of the name tags, no one felt missed out and everyone had a really easy time mingling with people, even those that they met for the first time,” Andrea told me.

Who to invite to the party?

Andrea invited a mix of his and his wife’s friends to their cocktail party. Many of the guests were couples who were in a relationship. That helped them get more RSVPs.

The party had 11 people in total including Andrea and his wife. This is something Andrea plans to improve on for his next party. His goal is to have at least 15 guests to pump up the energy and create even more new connections.

These are the things that Andrea learned after hosting his party.

Andrea learned that one must be willing to experiment. Europeans think: You can’t kick people out after two hours! They thought that maybe the things that work in the USA won’t work in Europe.

But the two-hour cocktail party that they just did proved their doubts wrong! Everyone had a great time and the method from The 2-Hour Cocktail Party gave them a much-needed thrill and structure.

He also learned that to be a good host is to actively manage your group. This was when he saw a friend of his that was shy and had trouble joining in conversations. So he gently included him into conversations and soon after, his friend had no trouble speaking with others. What a lovely gesture!

Andrea also saw the importance of standing up! Sitting down drops the energy in the room. He removed the chairs so that everyone wouldn’t be inclined to sit down.

Don’t forget: sitting down is kryptonite!

Lastly, as a party host, Andrea learned that you need to be willing to take initiative and do the work. The 2-Hour Cocktail Party was a new concept for people, and so while they might not be against it, they also don’t have the effort and willpower to initiate and do new things themselves. Andrea was happy that he did it himself to bring benefits and value to his community.

Benefits from Hosting a Cocktail Party

If you are a host, you can become a connector that helps your guests meet new and all kinds of people! You become kind of the center (not in a selfish way) and you just have this channel open for people.

You build your network of relationships. You keep in touch with acquaintances who you get to see more often, and they think about you, in return.

Andrea also loves to interact with people locally. My book has enabled him to meet new interesting people. Even his wife was excited and surprised at how great their party went!

Finally, Andrea found that hosting a 2-hour cocktail party was even easier to manage than a book club or to host a dinner party. You can connect and meet new people just as much without all that hard work.

The advanced icebreakers were Andrea’s favorite part of the party. It went very well. All of the guests shared one piece of media they’ve been recently using, and they had lots of informative fun to share ideas.

Those advanced icebreakers lasted for about 20 minutes, two minutes per person. Many guests also shared personal and interesting things so Andrea was hesitant to cut them off.

Planning the Next Party

Andrea is excited for his next party. He knows that hosting is a muscle, and that the more he hosts parties, the better and easier it will get.

Here are a few things he wants to work on for his next party:

Andrea put a lot of work into his party in Italy. And it was a success!

What he found was that his Italian friends and colleagues were willing to follow the instructions. He took a risk to host this party because it was so different from most European-style parties. But it paid off. Andrea and his wife reconnected with old friends. He knows that he will see more benefits, such as meeting new people, when he continues to host parties like this.

Do you want to host your own party? Have you hosted one before and have tips to make it work better?

Send me an email and I will help you out. Or I will update this article with your tips. Check out my book for a step-by-step guide on how you can host your own happy hour or cocktail party to help you build big relationships – even in Europe!