My Parents Hosted a Party: Here’s What They Learned 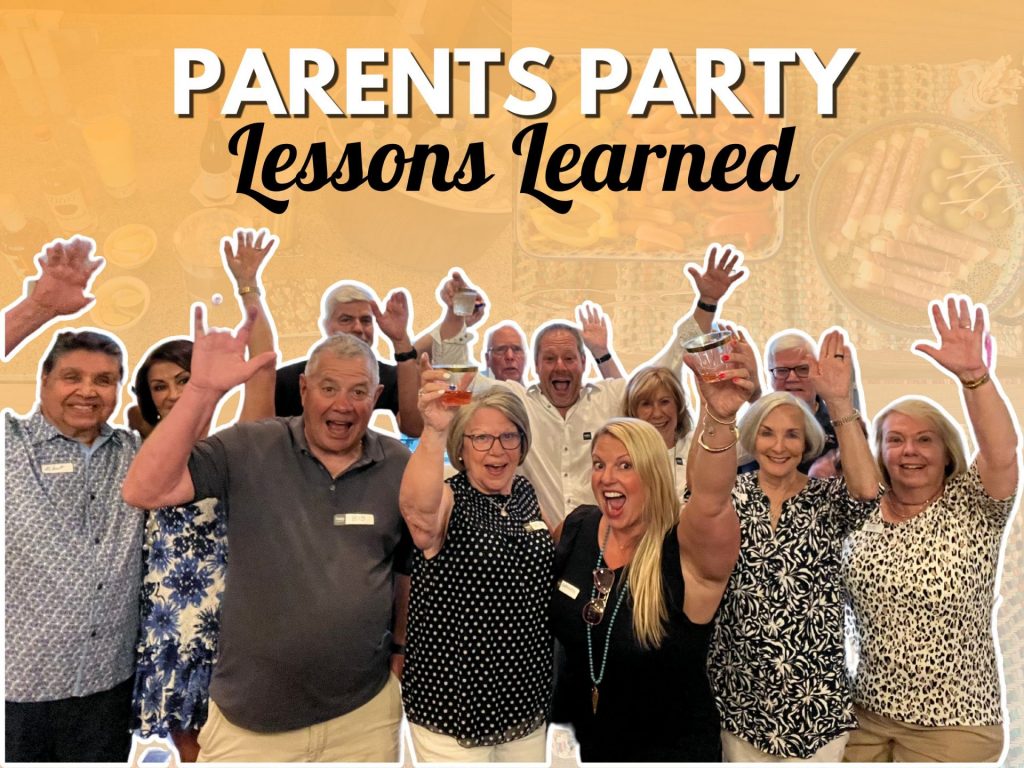 My parents hosted a party!

They split their time between Denver, Colorado and Dallas, Texas. They are in their 60s and admittedly were forced to host this party because I am their son 😅

But wait! They had a great time, made new friends in their neighborhood, and are already planning their next party.

Keep reading to see how your parents can make new friends. I’ll show you how they can host their own happy hour or cocktail party to meet new people in their neighborhood or community.

We have less friends as we get older. It becomes a game of attrition: people move away, relationships change, and we have fewer friends each year.

Nobody teaches adults how to make new friends. But as we get older, we need more friends. It is especially nice to know people in your neighborhood. To say hello when you’re out on a walk. Or to borrow some coffee beans when you run out 😅

That was the case for my parents. They moved to a new neighborhood in the suburbs of Denver, Colorado. They wanted to meet more of their neighbors and do something fun for the people that they often saw on their walks.

My parents read my book, The 2-Hour Cocktail Party, to get ideas for how they would host their party.

The ideas that they used were:

You should always invite your core group to your party first. These are your close friends or next door neighbors. You’ll send five people preliminary invitations to check and confirm that they’re available on the date and time of your party.

Remember to use a long party runway. Give yourself at least 2-3 weeks to collect RSVPs. This will guarantee a successful turnout.

My parents considered posting flyers around their neighborhood like Sujan did. But they decided that didn’t feel right. So they invited their next door neighbors first.

Once they had locked in five people with the sample date and time that they proposed, then their party planning and invitations could begin.

Next, they invited a few other couples that they had seen during their walks. Some of the people they invited suggested others to invite. This helped them to invite a total of 20 people. The word spread around the neighborhood and soon my parents had 15 RSVPs.

Ultimately, they had 12 people attend their party with a wide diversity of age groups. The youngest person was 45 years old and the oldest person was 90 years old. Success!

My dad met someone at one of his favorite restaurants and even invited him! This was one of the coolest things about their party planning process: I don’t think my dad would have connected with this individual unless they were hosting the party.

When you host a party, you will have a great excuse to make new friends and meet new people.

Read this article for more ideas: Who to Invite to Your Party.

These are the key things that my parents learned after hosting their first party using my formula.

“Just follow the formula! You may want to modify it like we did and add some more food. Or maybe you only want to do one icebreaker. Listen to my son! His book is good and has been tested hundreds of times. Do not try to modify it for your first party. It will be a success if you follow the instructions.”

Older people are more stubborn. They might not want to do the icebreakers, or the name tags. But our neighbors loved it! They liked the structure. Follow the formula.
—David and Susan Gray

“People did not drink that much alcohol. We were surprised. Maybe we just do not have friends that are heavy drinkers.”

“The most popular snack that we got were the brownies from Costco. My neighbor just stopped me on the street this morning to say how much they liked them. Besides that, we got way too much food. Simple snacks would be best.”

The start and end times that my parents decided were from 6:30 PM to 8:30 PM. My father was very strict with asking everybody to leave on time!

With older people, maybe it is easier for them to end their party sooner. Some guests wanted to stay and talk afterwards. My parents said that they would love to catch up later, but they needed to clean up and get ready for bed. It helped them stick to their goals of ending the party early and in a stress-free way.

My parents were so happy that they did this. They wondered why they did not do it sooner. They enjoyed meeting all of these people in their neighborhood.

Now, they might be biased. After all, I wrote this book, and I’m their son, so they sort of had to do it 😂

But it really was a great experience. My parents made new friends and created stronger relationships with the neighbors that they see every day. That is something hard for adults as we get older. Everyone can use a new friend these days.

My parents are already planning their next event. The neighbors who were unable to attend have been buzzing my mother’s phone, asking when their next party will be.

Have your parents hosted an event like this? Do you think my book about how to host a party would make a good gift for your parents? Send me an email and let me know what you think.