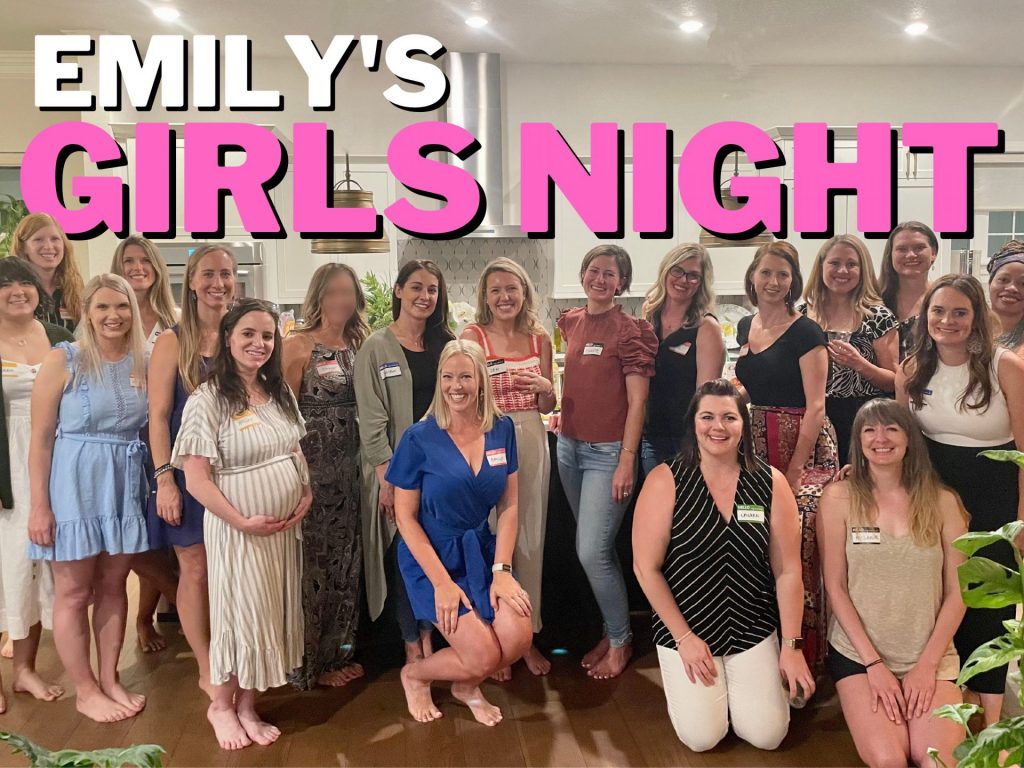 My sister Emily hosted a Girls Night for her friends. She lives in the suburbs of Denver, Colorado. She used my book The 2-Hour Cocktail Party to bring together different social groups and help her friends meet new people.

Emily invited women from several different social groups to her party. That included:

How Many People to Invite

This is an edited transcript from a phone conversation I had with my sister the morning after her party.

Q: How were the name tags?

A: I loved them. It was super helpful for the new people. I wrote all of them myself, like you said, and that was a great way for me to welcome everyone who came.

Q: How did the icebreakers work?

A: They were good! I forgot to do all three parts of the first icebreaker. I only asked, What is your name? And: What is one of your favorite breakfast foods? So I forgot to have people say what they did for work. About 30 minutes later, we did the Speed Icebreakers, and I’d say those were really good and a big hit.

Q: You did speed icebreakers! Wow. How’d that go?

A: People loved it. I had to participate myself because the group was uneven. I gave everyone about a minute to answer each question. I used your list and cherry-picked my favorites. The room was the loudest during these! I think they really encouraged a lot of new conversations.

WARNING: Speed icebreakers are an advanced activity. They are a bit complicated and loud. My sister has seen me do them several times before, so she knew how to set them up. I do not recommend speed icebreakers for anyone who has hosted less than three parties using my formula! See this article for tips and best practices.

A: I lost it 😞 and I couldn’t find it. I wish I had it. I had to keep yelling to get everyone’s attention, and that was pretty frustrating. I know you said to use a harmonica. I also wonder if I could use a dinner bell.

A: People LOVED knowing that I invited friends from different social circles. It was a real medley of attendees. In one of my reminder messages I said: “This isn’t a group of cliques. I’m mixing up my friend groups so everyone will be new and not know each other.” That helped them have confidence to start new conversations.

Q: How about snacks? What was most popular, and what was least popular?

A: Cheese and crackers were most popular. Chips and salsa were surprisingly not popular. Someone brought cookies and those were a hit. Veggies and hummus were good.

Q: Anything else people should know?

A: The signs! I had a sign on the front door that told people to come in and take their shoes off. I put a sign where the trash was. I had a sign on the sliding door to the patio that said, “Please close behind you.” I had signs for instructions on the spritzers, and more. People gave me compliments on these and said that I was so well-prepared.

Pro tip: Simple party signs are a must-do for any party! See examples and photos here from other parties.

Q: Would you do it again?

A: I definitely want to do it again! People had so much fun. It was great.

Q: Why did you do your party for three hours instead of two hours? The name of my book is literally The 2-Hour Cocktail Party 😡

A: First, don’t tell me what to do. I’m an adult. Second, this was on a Saturday night, so I thought we could hang out a little longer. But my friends ended up staying an EXTRA hour later, and thus it ended up being four hours, which was not ideal. I would have preferred only three hours. So maybe next time I will say it is only two hours, and then people can hang out an extra hour later.

I helped my sister compile the Guest Bios for her party because I knew how helpful they would be. We did Guest Bios for everyone attending the party and it only took about 15 minutes. As I read out the names of the attendees, Emily would tell me about the person.

Guest Bios are an essential part of my party formula! See what they are and why they are important in this article.

Here are a few of the ones she sent to everyone in the reminder messages. I’ve removed their last names for privacy purposes.

Emily’s theme was Summer Spritzer. She wanted everyone to bring something to mix with prosecco and water. Her guests went “All out” on the theme and brought tons of things! Girls brought fancy mixes and garnishes. Raspberries, blackberries, lemon peels, mint, rosemary, and more.

One lesson learned was that Emily thought her guests would pre-mix their drinks. Not everyone did, and that caused a ton of different mixes to be brought. In hindsight, Emily wishes she might have tasked her group differently. For example, asking five girls to bring prosecco, five others to bring snacks, and the remaining ten to bring flavored mixes.

Nick’s note: I don’t like themes, personally, but I understand that a lot of people do! I still don’t recommend a theme for your first few parties. Stick to the basics and only add a theme later.

My sister used Mixily, a free platform that I like, to collect RSVPs for her event. Here’s how the invitation looked.

This was a great event. My sister was so happy to get her friends together. She was thankful to use my book as an excuse to do that.

Emily is an advanced host, having hosted lots of events before. So she had the confidence to experiment with her own theme, hosting her party on a red-level day, inviting lots of people, and doing speed icebreakers.

Do you want to host a Girls Night? Have you hosted one before and have tips to make it work better?

Send me an email with anything to add to this article. Or check out my book for a step-by-step guide on how you can host your own version.